Most investors have probably heard the term “fintech,” but they don’t necessarily know what it means. And even those who know what the word refers to may not fully understand what many fintech — short for financial technology — outfits actually do.

If you’re part of this confused crowd, there’s good news. Not every fintech company is too complex to understand. Here’s a rundown of three publicly traded fintech companies that anybody can get a handle on and therefore be comfortable investing in. 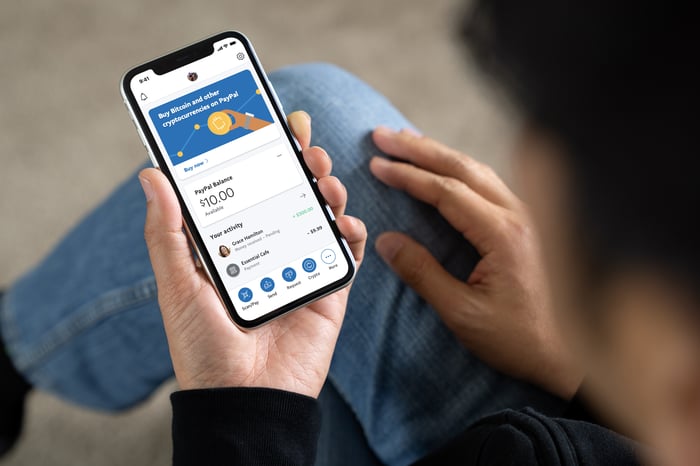 PayPal Holdings (NASDAQ:PYPL) is arguably the original fintech company, formed even before fintech became a word. It started back in 1998 as an organization called Confinity, but took on the moniker and premise we know as PayPal in 1999 when it allowed people to make and accept payments via email.

eBay plugged into PayPal’s platform in 2000, and by 2002, it had become the online-auction site’s official digital-payment middleman. The rest, as they say, is history.

Plenty of alternative payment platforms operate in this space now, like Square and Adyen, while more traditional players like Mastercard are inching their way into PayPal’s digital-payments turf. PayPal is expanding beyond mere payments, as well, with options like coupon management and buy-now-pay-later plans.

Its core business is still the same simple one it started more than two decades ago. It helps people make digital payments without the use of cash, credit cards, or the money orders that eBay originally required to buy goods at its website.

Unlike PayPal, Upstart Holdings (NASDAQ:UPST) isn’t a household name. It’s also nowhere near as old or seasoned as PayPal, as it was founded back in 2012.

It operates in a business, however, that’s as old as the hills — lending. Simply put, Upstart has figured out a way to quantify credit risk for lenders that it claims is better than the FICO scores most of them currently utilize. It partners with various lending institutions and determines the creditworthiness of loan clients for a fee.

At the heart of Upstart’s approach to determining someone’s creditworthiness is artificial intelligence (AI). While the company’s algorithm is proprietary, its success rate isn’t a secret.

Upstart Holdings says its approach is able to approve 27% more borrowers than the traditional approval approach, while defaults on the loans it greenlights are 48% below what would be considered a normal default rate. That’s why more and more lenders are tapping the company for help making lending decisions.

Upstart originated 362,780 loans during the third quarter of the year, up 244% year over year, lending (through its partner banking institutions) a total of $3.1 billion. Its revenue from fees grew 250% during the three-month stretch, reaching a total of $228 million.

Still, the fact that four of its lending partners dropped their FICO requirements last quarter to rely solely on Upstart’s data speaks volumes about how well its platform does its job.

Finally, add Coinbase Global (NASDAQ:COIN) to your list of fintech stocks that aren’t quite as complicated as you might expect the typical fintech stock to be.

If you’re reading this, you’ve almost certainly heard of cryptocurrencies. You may not understand what they are, how they work, or why anybody would want to speculate in them. But there’s no denying they’ve captured the world’s attention in earnest since Bitcoin started to soar in 2017, putting it and other cryptos on the map, so to speak.

As you will quickly learn if you want to try your hand at trading these digital currencies, however, you can’t simply log into your online brokerage account or call your broker to place a trade. It requires a trading account designed specifically for cryptocurrencies.

Enter Coinbase Global. It serves as an exchange for those looking to buy and sell crypto. But more than that, it offers a digital wallet for anyone who wants to just hold or spend their cryptocurrencies as they previously would have with cash. The Coinbase wallet can also hold non-fungible tokens, or NFTs.

All of the services Coinbase Global offers generate revenue one way or another. The company did $1.2 billion worth of business during the third quarter alone, turning $406 million of it into net income. Look for those figures to keep growing as cryptocurrency moves deeper into the mainstream.