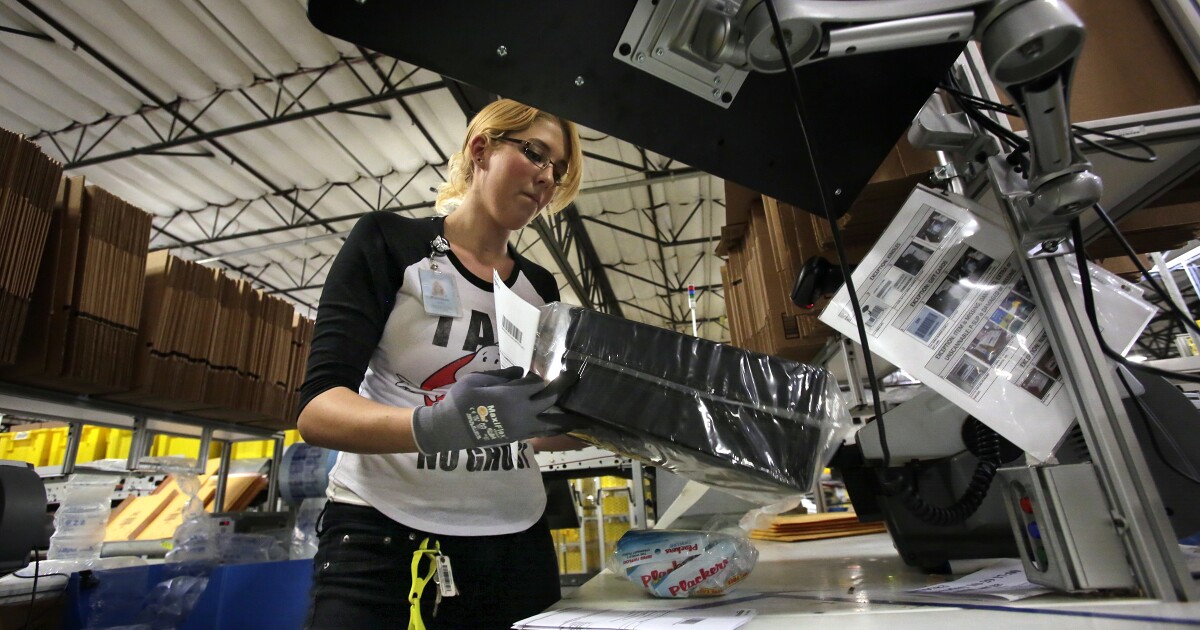 Amazon, having added hundreds of thousands of workers during the pandemic, faces a quandary: how to trim its workforce to match slowing growth of e-commerce without fueling labor unrest and giving ammunition to unions.

When the world’s largest online retailer reported earnings Thursday, it acknowledged that the logistical capacity added to handle a surge in demand from homebound consumers has left it with too many workers and a surfeit of warehouse space.

With shoppers returning to their pre-pandemic spending habits, the company lost money in the last quarter, posting the slowest sales growth since 2001, and warned that revenue and profits would suffer in the current period.

The company’s stock sank 14% on Friday, with a loss in market value — $206.2 billion — that ranks as one of the worst in Wall Street history.

Amazon responded to the pandemic by doubling the size of its logistics network over a two-year period — a rapid buildout that exceeded those of rivals and partners like Walmart, UPS and FedEx. For a time, the Seattle company was opening a new warehouse somewhere in the U.S. roughly every 24 hours.

Many investors hoped Amazon would be able to dial up profits once pandemic-related strains eased because the company had plenty of space and could slow spending on new facilities. Instead, Amazon overbuilt and is now stuck with costs that are outstripping demand.

The company is unlikely to close facilities because it remains committed to one-day and same-day shipping, a key goal now that many of its competitors are able to get products to customers in one or two days. However, Chief Financial Officer Brian Olsavsky said this week that Amazon is slowing the pace of new construction, pushing back the opening of planned warehouses.

The labor challenge is more fraught. Earlier this month, a labor union started by a fired Amazon worker won a historic victory at a company warehouse in New York’s Staten Island. On Monday, federal labor officials are expected to start counting votes for an election at an Amazon facility across the street from the first. Even if the union loses the second vote, labor organizers are expected to attempt to organize other company warehouses across the country.

Amazon, the second-largest private employer in the U.S., hired roughly 780,000 people over the past two years, bringing its workforce to 1.62 million. It also raised wages, paid bonuses for new hires and was willing to send out half-empty vans to ensure that customers got their packages on time. Now it needs to find a way to reduce headcount and rein in labor costs.

Attrition will almost certainly take care of part of the problem. Turnover at Amazon warehouses is famously high, with many employees staying less than a year due to the physical strain of standing at a workstation for a 10-hour shift. But the company also signaled that it is entering a period of belt-tightening.

“Our teams are squarely focused on improving productivity and cost efficiencies throughout our fulfillment network,” Chief Executive Andy Jassy said in a statement Thursday.

In practice, that could mean leaner staffing in warehouses and more pressure on the people retrieving and boxing items to speed their work and make fewer errors.

“They have significant labor pressure, both blue and white collar,” said Tom Forte, an analyst with D.A. Davidson & Co.

Amazon in recent years has tried to soften its reputation as a grueling workplace, touting an average starting wage above $18 an hour, as well as new safety initiatives to curb an injury rate that exceeds industry averages. Those programs could take a hit in a dawning age of austerity, potentially angering workers who already have a long list of unions eager to help them extract better working conditions.

Further labor unrest, assuming it happens, could prove politically perilous for Amazon. President Biden has expressed support for making it easier for workers to unionize, while Sen. Bernie Sanders, the Vermont independent, has proposed ending government contracts with companies that violate labor laws. While the proposal is unlikely to bear fruit soon, if ever, Sanders has scheduled a hearing on the matter for next week.

How much overcapacity Amazon needs to work through is hard to gauge, and some analysts believe the massive warehouse expansion will come in handy during peak shopping periods, including the Prime Day sale in July and the December holiday season.

“Growing into existing fulfillment capacity may be one of the easiest problems for Amazon to solve in its history,” BofA Securities analysts wrote Friday in a note to clients.