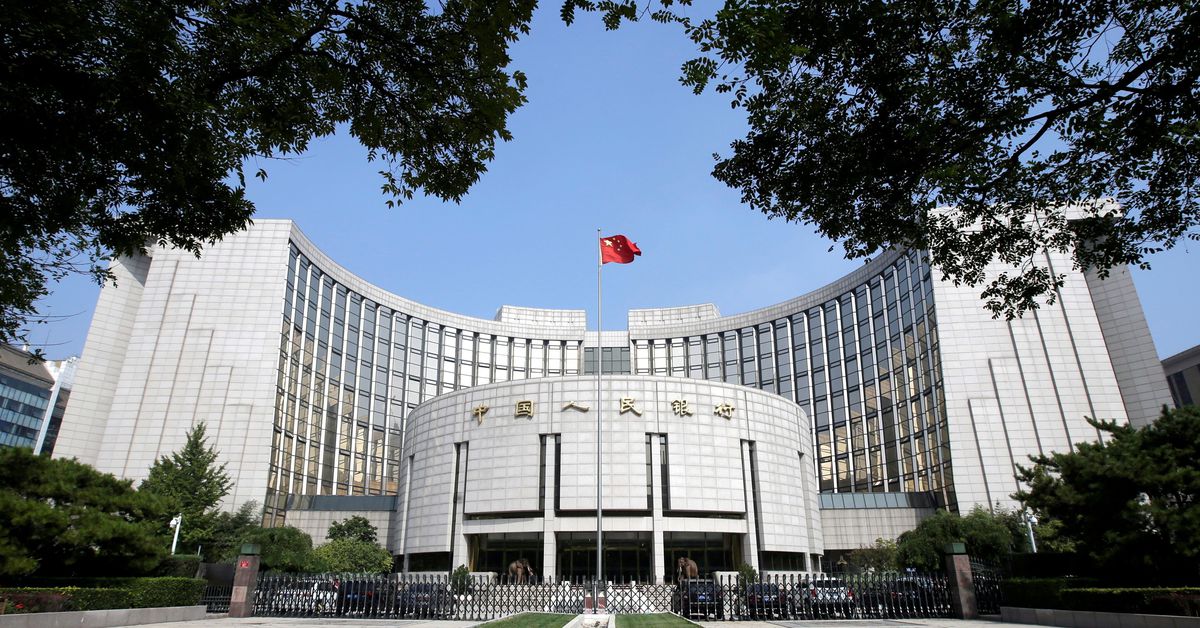 Headquarters of the People’s Bank of China (PBOC), the central bank, is pictured in Beijing, China September 28, 2018. REUTERS/Jason Lee

“Cross-border online brokerages are driving in China without a driver’s license. They’re conducting illegal financial activities,” Sun Tianqi, head of the Financial Stability Department of the People’s Bank of China (PBOC), said in a speech, according to a transcript released on Wednesday.

Shares of the two firms had already tumbled since Oct. 14, when the official People’s Daily said in an analysis on its website that Futu and UP Fintech face regulatory risks as China’s new personal data privacy law takes effect on Nov. 1.

Investors are concerned that the sector will be next in Beijing’s regulatory crosshairs, after China launched a flurry of crackdowns targeting sectors ranging from technology to cryptocurrency and real estate.

Investors need to see whether the Chinese government will restrict domestic individuals from opening an account at an offshore bank, and whether they can use this account to open a trading account with offshore brokers like Futu, Jefferies said in a note.

Jefferies added that many Chinese securities firms have set up their offshore subsidiaries to provide Hong Kong or U.S. trading services to domestic individuals, and foreign brokers including Interactive Brokers Group Inc (IBKR.O) also accept mainland Chinese clients, so “we need to wait for more guidelines from the regulators”.

Futu Chairman and CEO Hua Li said in a posting on Thursday that the company has business licenses in Hong Kong, enjoys a good track record, has sufficient capital and “there are no bankruptcy issues.”

The speech by the PBOC official threatens to further dent foreign investors’ confidence in Chinese tech firms, said an institutional investor in UP Fintech, who declined to be named.

Speaking at the Bund Summit in Shanghai over the weekend, PBOC’s Sun said that some online brokerages, with only overseas licenses, serve mainly mainland Chinese investors, allowing them to trade U.S. and Hong Kong stocks.

Without identifying the firms, Sun said that 80% of accounts of a brokerage registered in the Cayman Islands were opened by mainland clients, while the ratio is 55% for another Hong Kong-registered brokerage.

The transcript of Sun’s speech was released on the website of the Finance 40 Forum, which organised the summit.

Futu, which has licenses in Hong Kong, Singapore and the United States, said in its 2020 annual report that it primarily serves the emerging affluent Chinese population and a large number of its clients are mainland Chinese citizens.

Futu said it does not believe it engages in securities brokerage business in China by redirecting users and clients to open accounts and make transactions outside China, but said there were regulatory risks.