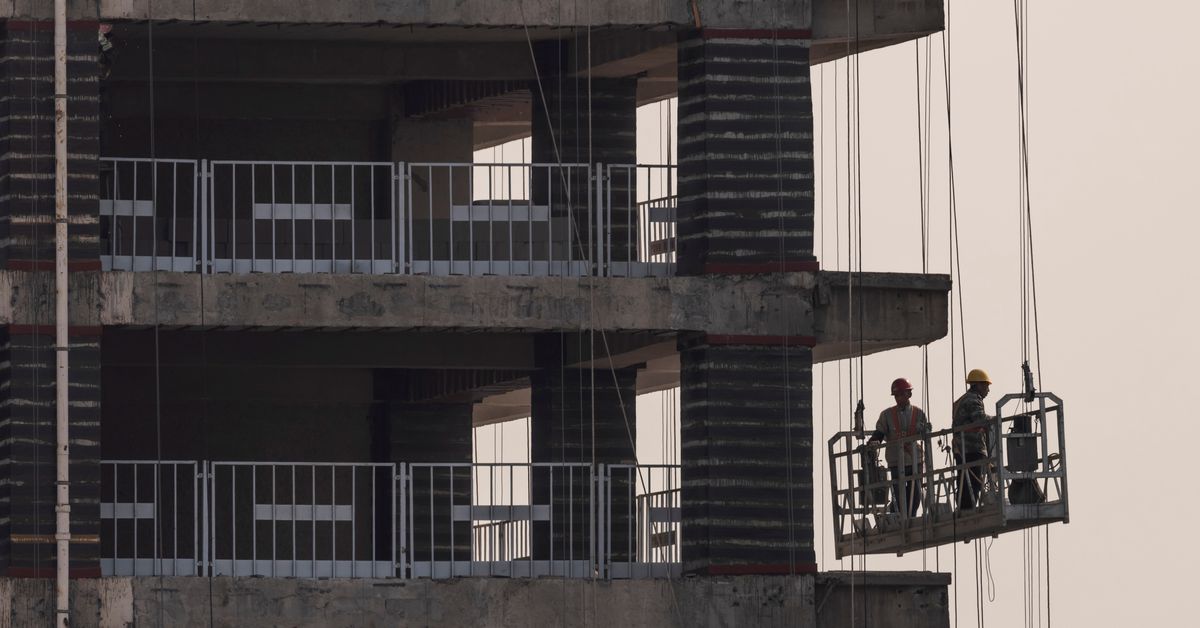 Men work at the construction site of a highrise building in Beijing, China, October 18, 2021. REUTERS/Thomas Peter

HONG KONG/SHANGHAI, Oct 26 (Reuters) – Modern Land (1107.HK) defaulted on a bond payment, the latest Chinese property developer to do so, adding to worries about the wider impact of the debt crisis at behemoth China Evergrande Group (3333.HK), and weighing on shares in the sector.

Modern Land (China) Co Ltd said in a filing on Tuesday that it had not repaid principal and interest on its 12.85% senior notes that matured on Monday due to “unexpected liquidity issues”. The bond has outstanding principal of $250 million.

Separately, China’s state planner said it and the foreign exchange regulator met with companies in “key sectors”, which a source said included property firms, over their foreign debt holdings, asking them to “optimise” offshore debt structures and prepare to repay interest and principal on foreign bonds.

Modern Land’s missed payment comes days after the company, a smaller developer, scrapped plans to seek investor consent to extend the maturity date of the bond by three months, saying doing so was not in the best interests of it and its stakeholders.

Ratings agency Fitch earlier this month cut Modern Land’s rating to “C” from “B” over the attempt to change bond terms, saying it considered the move a distressed debt exchange. The debt default prompted ratings downgrades by Fitch and Moody’s.

Developers are defaulting “one by one”, said an investor with exposure to Chinese high-yield debt, who asked not to be identified as he is not authorised to speak to media.

“The question is always, who’s next?”

After weeks of near-silence as investor worries over Evergrande and other developers mounted, Chinese regulators including the centralbank have become increasingly vocal.

Late on Tuesday, China’s National Development and Reform Commission said that it and the State Administration for Foreign Exchange had met with foreign debt issuers, telling them to use funds for approved purposes and “jointly maintain their own reputations and the overall order of the market”.

This month, Fantasia Holdings Group (1777.HK) defaulted on a maturing dollar bond that heightened concerns in international debt markets, already roiled by worries over whether Evergrande would meet its obligations.

Evergrande, which narrowly averted a costly default last week, is reeling under more than $300 billion in liabilities and has a major payment deadline on Friday.

The company said on Tuesday it would deliver 31 real estate projects under construction in China’s Pearl River Delta region by the end of 2021. That number will rise to 40 by the end of June 2022, Evergrande said in comments to Reuters.

Evergrande had said on Sunday it had resumed work on more than 10 projects in six cities, including Shenzhen in southern China, after earlier halting them because it was unable to pay contractors. The developer has some 1,300 real estate projects across China in total.

The prospect of contagion and more defaults have weighed on the sector in a major setback for investors.