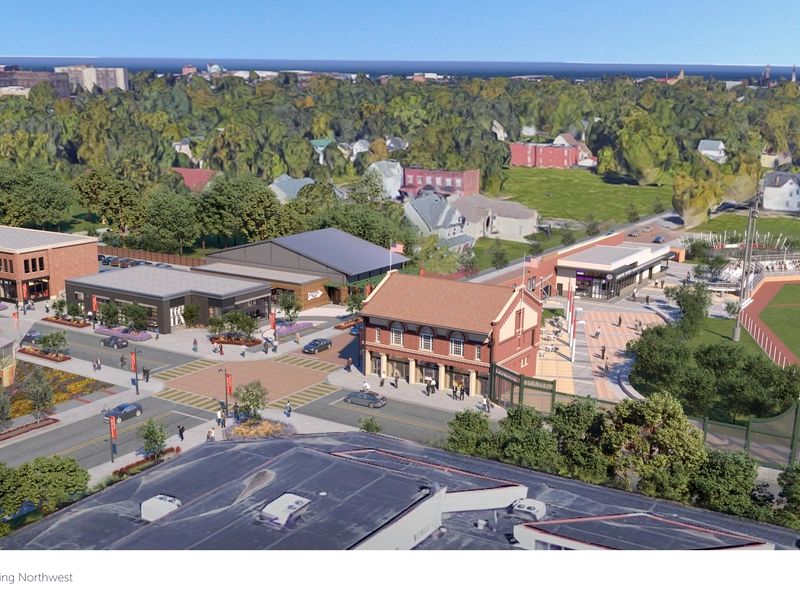 The Cleveland City Planning Commission gave an early thumbs-up to the development on Friday, Jan. 7. Members of the project team described the plans as very conceptual — and contingent on the acquisition of three vacant parcels owned by the city’s land bank.

The $5.5 million deal is being shepherded by the nonprofit museum; attorney Cassandra Manna; Ozanne Construction Co. Inc. of Cleveland; and Signet Real Estate Group, an Akron-based developer that is active in Hough and Midtown. Plans drawn up by City Architecture show 27,000 square feet of buildings west of League Park, the museum’s longtime home.

The second building, at Lexington and East 66th, could be a food hall or a series of restaurants with garage doors that open up to the street, he said.

To the north, a single-story building on East 66th will provide additional archive space for the baseball museum, along with indoor batting cages. Site plans also show pedestrian plazas, public art and a 22-space parking lot.

Bob Zimmer, the museum’s founder and president, said he’s committed to staying put at League Park, a restored historic ballpark that was used by teams including the Cleveland Indians and the Cleveland Buckeyes of the Negro American League. A ground-up expansion across the street will allow the organization to broaden its programming, offer winter activities indoors and better care for archived materials.

“We see this as something that’s really going to be helpful for our growth,” he said during a phone conversation.

Manna said the development team hopes to start moving dirt “as soon as possible.” The group controls most of the 1-acre site and has applications pending for the three land-bank lots. The planning commission’s approval was a key precursor to finalizing the acquisitions.

“We know, obviously, that Hough is a neighborhood where retail has not survived in the past. But it is developing a lot,” said Manna, noting that new residents are moving in and longtime residents are promoting the area.

“We think, with all these trends, there’s a real opportunity here for growth — and sustainable growth — in the long run,” she added.

The project is one of many planned or under way along East 66th, a north-south corridor that is the subject of a streetscape overhaul being designed by City Architecture.

The Cleveland Public Library is constructing its new Hough branch at the southwest corner of East 66th and Lexington. To the north, new homes are slated to rise as part of a project called the Allen Estates.

A short stroll south from League Park, at East 66th and Euclid Avenue, the Cleveland Foundation is building its new headquarters. Next door, the Dunham Tavern Museum is repositioning its campus as a central park, of sorts, for Midtown. And property across from the foundation’s future home is earmarked for the first building in the Cleveland Innovation District.

Other developers in Hough are working on apartment deals, retail projects and plans to reactivate empty buildings, including the former Martin Luther King Jr. High School on East 71st Street.

Lillian Kuri, the planning commission’s new chairwoman and executive vice president and chief operating officer at the Cleveland Foundation, recused herself from the discussion and vote about the project at East 66th and Lexington because of the foundation’s work in the neighborhood.

Later in the meeting, though, after a vote on another project that will bring a child care center and new storefronts to vacant land at East 82nd Street and Wade Park Avenue, she applauded the recent wave of creative proposals that the commission has seen.

“This makes me so excited about the neighborhood retail that’s starting to emerge,” she said.

The Bibb administration plans to hire a new planning director to replace Freddy Collier, who was moved into another job outside of the department this week. Collier joined the planning department in 1999 and had held the top job since mid-2014.