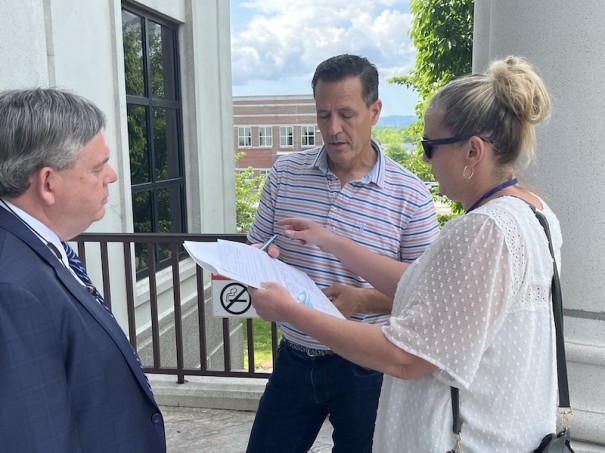 Jimmy Altmeyer goes over paperwork with foreclosure sale trustee Jennifer Belter Formichella after the sale of the Shepherd property.

The Thos. Shepherd & Son Funeral Directors property will most likely reemerge from the ashes of a sensational business collapse to serve the community as a funeral home once more.

That looks to be the outcome of the forced sale of the South Church Street property on May 16 after the lender foreclosed. First Bank had initiated foreclosure in May of 2021 when Melody and Thomas R. “Tom” Shepherd stopped making payments on a $793,358 loan they took out against the property in March 2018. At the court-ordered sale of the prime downtown real estate, James E. “Jimmy” Altmeyer Jr., president of Altmeyer Funeral Homes & Crematory, outbid a commercial real estate investor after 24 volleys. Altmeyer’s bid of $2,025,000 stood after no one filed an upset bid within 10 days.
“We’re working hard to get it all renovated,” Altmeyer said Friday from his home office in Virginia Beach, Va., where he had returned after spending the week in Hendersonville. “We’re going to paint and carpet and get it all spruced up so we can get it reopened as soon as possible.”
He said he expects the renovations will take at least three months “because in this day and age remodeling takes a little bit of time.” He was talking to contractors this week and hoped to have one signed on soon for the work.
“We’re looking at hiring some people” to operate the funeral and crematory business.
“So that will be good for the community” because he expects to hire local people. Altmeyer is making plans to appear before the N.C. Board of Funeral Service, which must approve the opening of a new funeral home. It would seem unlikely that the board would object to Altmeyer’s application, given its long history in the business and the fact that it already operates in North Carolina.
Founded in 1917 in Wheeling, West Virginia, Altmeyer Funeral Homes and Crematory operates funeral homes in that state and in Ohio, Virginia, North Carolina and Florida. The company owns Shuler and Forest Lawn funeral homes in Hendersonville and Mountain View Cremation & Funeral Care in Arden.
The reopening of the Church Street location as a funeral home and chapel is likely to be a comfort for families that have known and respected the Shepherds for generations and expected to have a funeral service in the stately brick building. When the Board of Funeral Service shut down Thos. Shepherd & Son Funeral Directors last December after finding numerous business violations, it seized around 600 preneed contracts. After first offering the contracts to Jackson Funeral Service, which turned them down, the board then trasnferred them to Shuler. (Consumers who have bought preneed contracts are allowed under the law to move the agreements to another funeral home at any time for any reason.)
“They will definitely be given the opportunity to choose the building they want to use,” Altmeyer said of the families that had purchased preneed contracts from Thos. Shepherd & Son.
The company hasn’t settled on a name yet but will need to choose one before it appears before the Funeral Services Board to apply for a license, Altmeyer said.
“My No. 1 goal right now is to get the building in condition to open,” he said. “Obviously, the funeral home has been in business for well over a hundred years and people have a family tradition and family history with it and we’re looking forward to offering outstanding service.”
It’s not clear what becomes of the balance between the sale price and the amount owed the lender. Not counting any attorney fees, court costs or other indebtedness against the property, the difference in the sale price and First Bank debt is $1,197,220.
Efforts to reach Melody Shepherd, who was widowed by Tom Shepherd’s death on Dec. 31, and her attorney, Michael Edney, were not successful on Friday.
“I just wish the best for Mrs. Shepherd, whatever her future might be,” Altmeyer said. “All I wish for her is a positive outcome.”