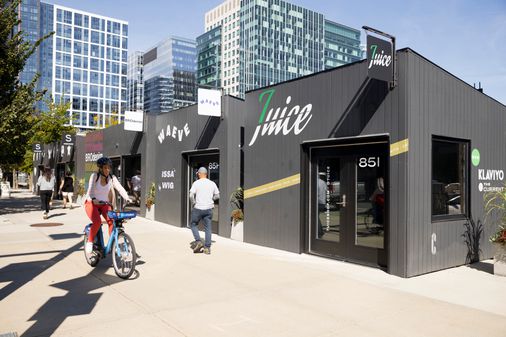 Klaviyo — which is valued around $9.7 billion, according to PitchBook, making it one of the biggest startups in Boston — helps businesses do their own marketing without forfeiting customer data to third-party services. It also provides messaging services and analytical tools to understand consumer behavior. WS Development, meanwhile, has prominent Boston properties in its portfolio, including in the Seaport.

To further grow the businesses, Klaviyo and WS Development will also launch a grant competition giving businesses a chance to win $25,000, and an opportunity to be part of the pop-up retail village next year.

“It’s a match made in heaven,” Carina Donoso, the senior director of retail experience and incubation at WS Development, said in a statement. “Klaviyo is powering the digital side of businesses, and WS is powering the physical.”

The showcase will start October 1 and run through the middle of January, company officials said. Of the seven businesses in the partnership, five are local and owned by women, and two are Black-owned enterprises, WS added.

Aloe Attiva, an Italian waterless skincare company co-founded by Marco Vernazza, will also maintain a presence. The company sells beauty products which use Aloe Vera that is extracted through the company’s proprietary technology.

The clothing company BROdenim will also be featured. Created by Boston native Laura Brodigan five years ago, the company sells denim jackets, sweatshirts, and accessories. It also maintains a location on Nantucket.

Injeanius, a Boston clothing boutique, is part of the group. The company, started in 2005 by Alison Barnard O’Brien, sells premium jeans, tops, and accessories. It currently operates at The Current.

Massachusetts-based Maison Nou, which makes luxury pajamas, will open its first brick and mortar store as part of the partnership.

Studs, an experimental ear piercing and earring business, will also have a pop-up installation. Piercings are by appointment only, and can be made through the company’s website at studs.com.

The shops will be open to patrons seven days a week. (From Monday to Saturday, stores will be open from 11 a.m. to 7 pm; Sunday’s store hours will be from noon to 6 p.m.) A concert celebrating this season’s stores will be on Oct. 29 at 6 p.m. in the Seaport district, featuring a live performance by Berklee College of Music student Chris Peters.