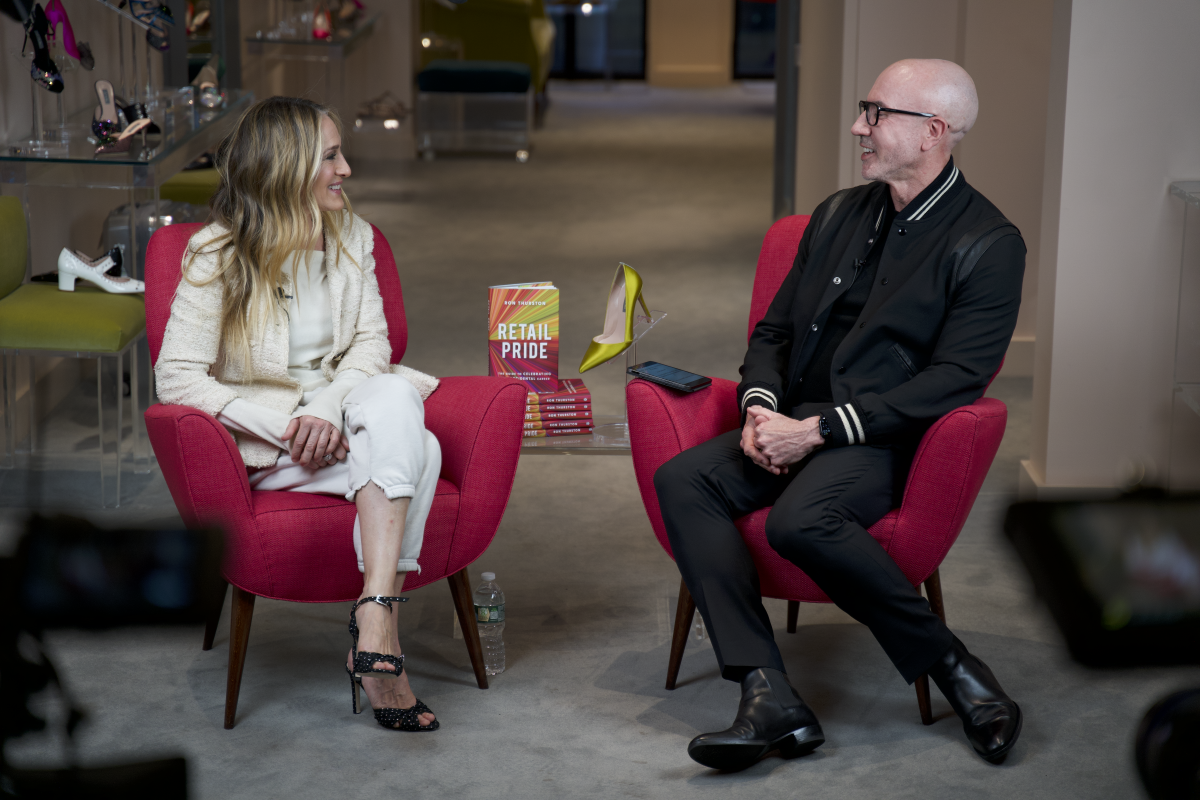 In a lively conversation with Ron Thurston, host of the podcast “Retail in America,” Parker shared her personal experiences as a shopkeeper; her love of shoes; how getting feedback from her customers differs from her stage and TV work, and how she feels the future of retail might lie in more intimate, mom-and-pop settings like her own.

“I bought and loved shoes even before I played Carrie Bradshaw,” said Parker, dressed in a cream tweed jacket and pants and dotted black sandals with rhinestone buckles. “I would buy shoes that would last forever or sometimes they were of the moment.”

She said she learned so much about the footwear business from her former partner, the late George Malkemus, who grew Manolo Blahnik’s business in the U.S. and became her partner in SJP. He died last year.

Thurston, who is the author of the book “Retail Pride,” was kicking off a cross-country trip in an Air Stream and interviewing mom-and-pop entrepreneurs, store managers and store associates for his podcast. “The journey is to discover everyday retail heroes,” said Thurston. The event was put together by KWI, the retail POS and omnichannel platform that runs the SJP stores, and is one of the sponsors of the tour.

While every city has its unique characteristics, Parker said: “New York is special. People come to take the biggest chance in the hopes they can swing a home run. It’s a city that very quickly lets you know where you stand. When you’re told ‘no,’ you want to prove the city wrong.”

Asked why she felt it was important to have a brick-and-mortar presence in New York, Parker said: “It didn’t occur to us to do anything else.” She started with a retail store in 2014 and added e-commerce three years ago.

Parker recalled that when she moved to New York in 1977, she used to travel on the tram to her home on Roosevelt Island. She would take the cross-town bus and travel up Madison Avenue and would see that every important shoe designer had a store. But growing up in Cincinnati, she said, twice a year her mother would take her and her siblings to the shoe store where they carried Buster Brown shoes. She would get a pair of saddle oxfords and patent leather Mary Janes for fall. In the spring, she’d get perforated T-straps that were all white.

These days, Parker said she appreciates the relationship a retailer can build with a customer and how much you can learn by talking to somebody. You can find out what they want versus what they need, how they find the fit and how the brand stands up to the competition. “You learn that by being on the floor just by sharing stories and seeing their feet,” she said. “It’s been for sure the most joyous part of the work.” Parker said unfortunately due to the pandemic she hasn’t been in the store in over a year, and they’ve closed their Seaport location.

“Retail is really hard. It’s terrifying, especially the last couple of years, it’s been hugely challenging,” said Parker. She said the brand’s e-commerce business is “the biggest part of the pie.” Still, she said she would never consider not having a store in New York, despite what financial counsel she receives.

Getting immediate feedback is important to Parker. “For me as an actor, you don’t have the opportunities to talk to your audience,” she said. She said being on the selling floor is an alive experience. “And it’s the oxygen. We all really love it.”

Parker said there’s this thing about having a shop of your own and having the keys to the shop and to be at the till and welcome somebody in. She said she loves throwing ideas in front of them and running to the stockroom. “It’s an old-fashioned way of engaging with people. It’s immediate satisfaction, even if you don’t make a sale,” said Parker.

During the pandemic, Parker felt a responsibility to keep her employees employed and keep the doors open. “People kept buying our shoes even though they had nowhere to go,” she said.

Thurston, who said the number-one reason he likes to work in retail is it creates joy, asked Parker what brings her joy today. She cited her work in the theater and performing to packed houses in “Plaza Suite” with her husband, Matthew Broderick. “That’s joyful. Also, having three healthy children who are fun and interesting, and I really like them, and the people I get to work with and get to be around and learn from brings me joy.”

When an audience member asked Parker what shoe made her realize she had really made it, she said it was the fawn, which is a classic pump on a 100-mm heel. “It’s allowed us to tell who we are.…It’s beautifully made, incredibly comfortable and some might argue it’s the most comfortable pump. We offer it in exquisite, really saturated colors. Our customer keeps coming back for more. That kind of satisfaction, it’s what we need to pay the bills,” she said.

After a few more audience questions, Parker said she had to leave to get ready for the evening’s performance.