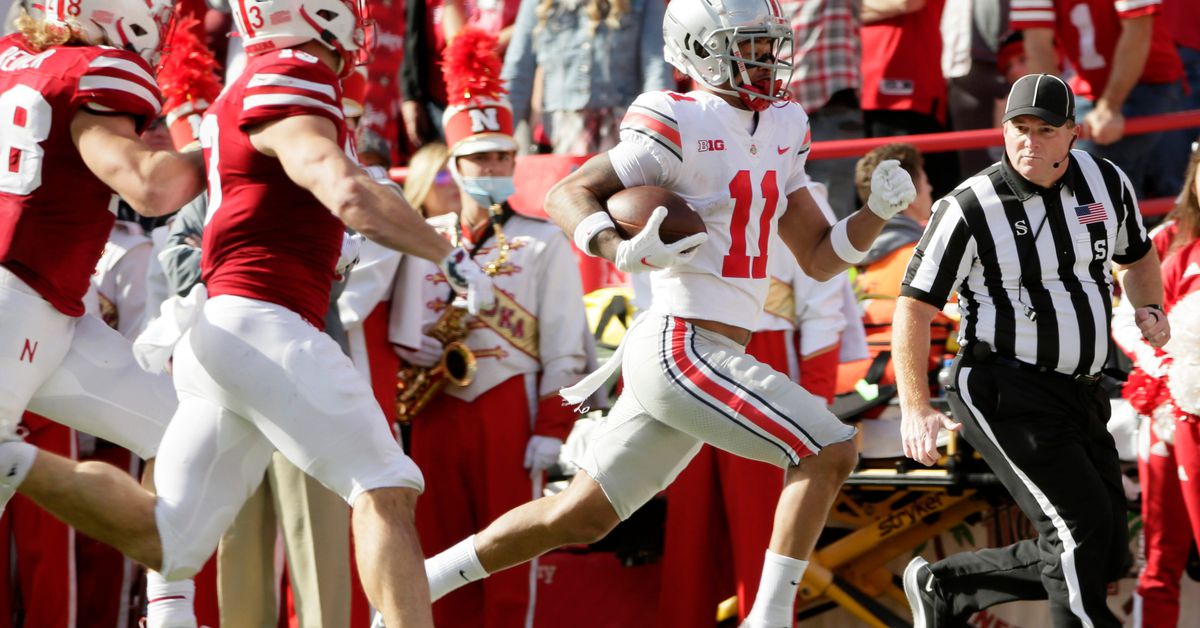 After each Ohio State game during the 2021 football season, LGHL will offer its market analysis of the Buckeyes’ performance. Using a standard bond rating system, we’ll evaluate the offense, the defense, and the special teams, according to this formula:

Then, we’ll take a look at any individual players whose performance stood out (in one way or another!) and assign them a stock rating: Blue Chip, Solid Performance, Penny Stock (akin to a junk bond, dangerously high risk).

A nine-point win. Four field goals. Two offensive touchdowns. Déjà vu: the Nebraska game was nearly a replay of the Penn State game the week before.

In November, as things get sticky, you take any win and move on to the next game. At least that’s what Ryan Day says. But he’s got to be worried about the Ohio State running game, about the red zone offense, about the lack of big offensive plays, about C.J. Stroud’s decision making this late in the season.

With the Buckeyes’ overflowing receiver room, nobody seemed concerned with Garrett Wilson’s absence from the game. But what about Stroud? Did the young quarterback miss his favorite receiver the way that Justin Fields missed Chris Olave in last year’s Big Ten championship game? Did Stroud seem nervous, unsure? He certainly wasn’t as accurate as usual, and he didn’t play as smart.

One wonders, too, about some of the coaching decisions. Ohio State gave up on the running game at halftime. TreVeyon Henderson rushed 14 times in the first half, but only seven in the second. OSU appeared to take control of the game after Jaxon Smith-Njigba’s 75-yard catch and run touchdown made the score 17-3. But Nebraska answered with a long touchdown pass of their own to make it 17-10. The Bucks ran Henderson three times on the next possession for six, one, and a loss. A bad time for a three-and-out, and the coaches turned away from the run.

Even on OSU’s first possession, they had it fourth and one at the Nebraska 43 and went for it. Surely, a running play would pick up the yard, but, instead, Stroud threw a long pass over the middle that tight end Jeremy Ruckert couldn’t pull down. Maybe we’ve come to expect magic. A surprise call for a touchdown, but what we got was a demonstration of a lack of confidence in the run and turning over the ball on downs. Late in the fourth quarter, when the Bucks needed to run the clock and the running game was finally beginning to click, with Henderson gaining 10, then 22 yards on a couple of carries, the Bucks chose to pass on first down. Stroud gets sacked and fumbles. Lucky to recover.

And on defense? Husker quarterback Adrian Martinez started to run the ball, as he’s well capable of doing, in the second half – on designed runs and especially on scrambles. Where was the linebacker spy? Somebody needed to be assigned to the quarterback. Probably Steele Chambers, who has the speed for the job. But the linebackers all kept dropping into coverage. All in all, there were some questionable coaching calls.

On the other hand, the game produced a Buckeye win. And Nebraska is no slouch. OSU won by nine, while Michigan State and Michigan each beat the Huskers by only three, and Oklahoma beat them by only seven. In fact, this loss was Nebraska’s worst of their seven for the season. With Michigan State’s loss to Purdue, the Bucks are alone at the top of the Big Ten East and can still win out and make the playoffs. As for the Cornhuskers? At 3-7 and at the bottom of the West, Scott Frost should be sending his resume around.

Just like last week? No, I think that the offense was actually worse. It’s not a good thing when your quarterback throws the ball 54 times, and Stroud did against the Cornhuskers. He completed two thirds of them (36) for 405 yards. A lot of passing yards – but only two touchdowns. Aside from Smith-Njigba’s long touchdown, there weren’t many big plays; rather, the passes were short, the Huskers, like Penn State, keeping receivers in front of them.

Henderson ran 21 times for 92 yards, a 4.4 average. Way below his season average, but, then again, maybe that’s simply where the OSU running game is these days. Miyan Williams and Master Teague carried the ball three times between them. Might it be better to do a little more rotating of backs? Give the opponents’ defense a different look? Maybe. But it’s the pass blocking, rather than Henderson’s running, that’s the real problem. All of those tackles up front do a good job of walling out pass rushers, but are they mobile enough to run-block a respectable defense?

Ohio State had no penalties in the first half but had eight in the second, as confusion and stupidity took over. The offense was pretty bad in this game. Luckily, the kicking of Noah Ruggles and the OSU defense came through.

Other than giving up two long passing plays of 72 and 53 yards, the Buckeye defense played really well. They held Nebraska to 113 rushing yards (many of them scrambles, late in the game) and allowed the Huskers to convert only two of 13 third-down attempts.

The defense was effective in rushing the elusive Martinez, sacking him five times and causing him to throw the ball away on several other occasions. Again, the most praise goes to the defensive front, as they simply controlled the line of scrimmage throughout the game. Linebacker Cody Simon led the defense in tackles with eight, followed by Ronnie Hickman (7) and Steele Chambers (6). With the offense struggling, as it was, the Buckeye defense won this game.

Ohio State special teams continue to play solid, clean games. Mistakes on special teams can certainly lose games for you, as Nebraska knows, from game after game. In this one, the Cornhuskers missed a couple of field goals and shanked a punt early in the second quarter, which led to a short-field touchdown to put the Bucks up 10-0. Again, Noah Ruggles made all of his kicks – extra points and field goals – including a career-long 46-yarder. Jesse Mirco punted four times for a decent 40.5 average, and Smith-Njigba, substituting for the absent Wilson, had a couple of nice punt returns, including one for 21 yards.

Jaxon Smith-Njigba. Last week, Ohio State awarded no one the coveted “Offensive Player of the Game” award, and only Smith-Njigba, of the offensive players, rated a “champion” designation. This week? Well, this week Smith-Njigba went wild. His 15 receptions set a new Ohio State record for most catches in a game, beating David Boston’s 14 in 1997. Smith-Njigba’s 240 receiving yards in a game was second all-time to Terry Glenn’s 253 in 1995. Julian Fleming and Marvin Harrison, Jr., each caught two passes as they filled in for Wilson, but it was Smith-Njigba, in a historic performance, who stole the show. A great game.

Noah Ruggles. Ruggles again booted four field goals, and his 46-yarder was a career long. As the season goes on, and the offense sputters, Ruggles’ kicking becomes more and more important.

Tyreke Smith. For the second consecutive week, I’ve put Tyreke Smith among the Blue Chip players. Yesterday, Smith was credited with five tackles, one sack, and one hurry. But his contribution was more than these numbers. The Cornhuskers couldn’t move him on running plays and couldn’t keep him out of the backfield on passing plays.

Chris Olave. Olave’s productivity was, of course, overshadowed by Smith-Njigba’s, but Olave caught seven passes for 61 yards and a touchdown. On at least two other plays, Stroud overthrew him or overlooked him. Olave’s 8.7 yard/reception average tells the story of Ohio State’s absence of big plays.

Javontae Jean-Baptiste. In the first quarter of the game, Jean-Baptiste recorded a sack and really helped on another that Jack Sawyer got credit for. I think that Jean-Baptiste’s early defensive line play established Buckeye dominance on the line set the tone for the game.

C.J. Stroud. In my opinion, this was Stroud’s worst game. Yes, I have a higher expectation for him now that he’s got eight starts under his belt, but he regressed against Nebraska. It’s not just the two interceptions and the fumble. Rather, it’s a whole game’s worth of poor decisions: throwing to the wrong receiver, throwing off balance on the run, getting the intentional grounding call. Maybe, frustrated with the way that the offense is playing, he’s trying to do too much. But he’s got to play smarter in tight games.

Jeremy Ruckert. Of course, I would have liked to see Ruckert make the catch on that fourth-and-one play on the first drive. But it would have been a great catch. No, Ruckert’s on this list for a few bad plays. His blocking of edge defenders wasn’t as good as usual. He went too far up field on a screen play, resulting in a bunch of OSU linemen to be “ineligible downfield,” and, after the interception, he foolishly hit the Nebraska player out of bounds for an unnecessary fifteen yards. He can play smarter – and usually does.

Paris Johnson Jr. Watching the game on TV, I have trouble assessing the line play, as the camera follows the ball. But yesterday, on three occasions, I noted “77-missed block,” as Henderson got stuffed at the line. Johnson wasn’t alone in failing to control the offensive line of scrimmage, but he wasn’t very good and typified the line play on runs.

The Buckeyes will finish up with three tough games, starting next week as they face Aidan O’Connell and David Bell, Purdue’s formidable passer-receiver duo.