The recent market sell-off has crushed a lot of growth stocks, including many fintechs. Since the start of 2022, the ARK Fintech Innovation ETF has lost 56%. However, for investors with a long-term outlook, this sell-off is an excellent opportunity to buy into these fast-growing companies at cheaper price points. Marqeta (NASDAQ:MQ) is one intriguing fintech trading at a deep discount since going public in June 2021.

Marqeta creates payment products for companies in a fraction of the time of its competitors and helps companies cut down on fraud in the process. Major companies have taken notice and are turning to Marqeta to bring payments into the modern age — and you can own this fast-growing fintech today at a fraction of its original valuation. 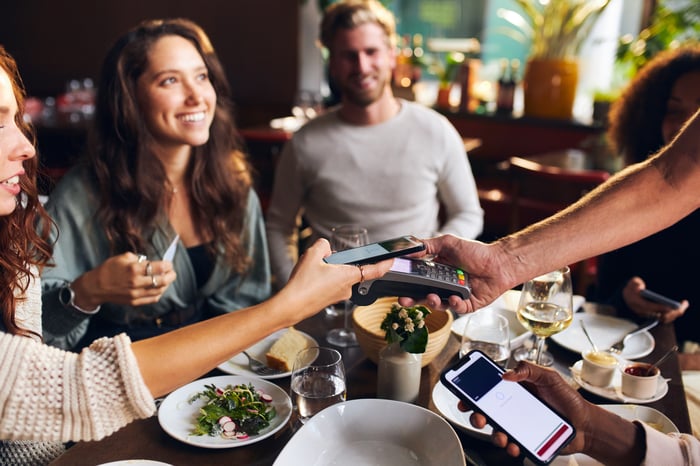 Marqeta creates physical and digital payment products, like debit cards, for companies so they can keep up in the world of digital payments. Global Payments, Fiserv, and FIS, are legacy payments companies that compete with Marqeta. However, one major advantage for Marqeta is its speed to market.

For example, Block Inc. (formerly known as Square) turned to Marqeta when it decided to issue a virtual debit card alongside its money-transfer app. Marqeta turned around a product in six weeks, while other competitors would’ve taken months. 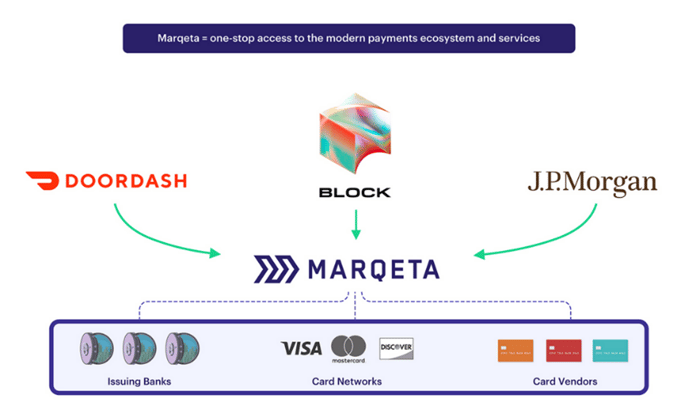 Clients also like the flexibility of Marqeta’s payment products. These products offer customers features that can drastically cut down on fraudulent payments. For example, DoorDash turned to Marqeta for its dynamic spending controls, which allow payments to be made at specific vendors, locations, or for specific dollar amounts. DoorDash cards are programmed to be used only at the restaurant a customer ordered from for the specific price of their order. Just-in-time spending is another feature that reduces fraud by allowing the vendor to authorize (or reject) transactions in real time.

These flexible payment solutions are why so many big-name companies turn to Marqeta. Marqeta’s stable of clients includes companies like JPMorgan Chase, Goldman Sachs, Google, Uber, Instacart, and Affirm, to name a few. However, investors should be aware that one customer, Block Inc., accounted for 66% of Marqeta’s revenue during the first quarter. While this is down from last year, when Block, Inc. represented 73% of total revenue, Marqeta still has work to do diversifying its customer revenue sources.

Total processing volume (TPV) measures the total amount of money people are spending through Marqeta’s platform, net of returns and chargebacks. This metric is an important way Marqeta measures its growth; in the first quarter, its TPV grew 53% from last year to $37 billion.   Since 2017, Marqeta’s TPV has grown at an impressive 175% compound annual growth rate (CAGR). 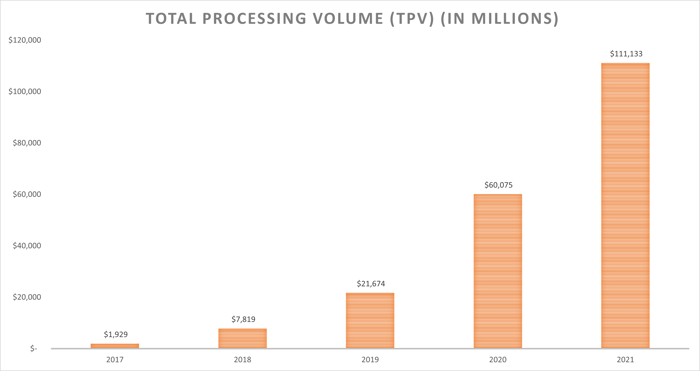 As Martqeta’s TPV grows, so grows its revenue. Marqeta makes money per transaction — similar to how Visa and Mastercard make money. In the first quarter, the fintech put up $166 million in net revenue, an increase of 54% from the same quarter last year. Since 2019, Marqeta’s net revenue has grown at a 90% CAGR.

Investors should be aware of this

While Marqeta is growing at an impressive rate, it also racks up significant losses. In the first quarter, Marqeta put up a net loss of $61 million, compared with its $13 million loss the prior year. In 2021, the company put up $164 million in losses after seeing losses of $48 million and $58 million in the two years prior.

In 2021, this totaled $143 million compared to $28 million the year before. The increase can be attributed to Marqeta’s IPO, its increasing employee base, and its CEO performance award.  Share-based compensation will likely remain high, with $450 million to be recognized over the next three to four years. $157 million of this is related to the CEO performance award, which will be recognized over the next 3.8 years.

A great company to add today

While stock-based compensation has weighed on net income, the company has done a good job generating cash flow. Last year, the company brought in $54 million in free cash flow, or the cash remaining after a company pays for operations and capital expenditures. This amount dipped in the first quarter, and Marqeta CFO Mike Milotich noted that accrued bonuses from last year and a large up-front cost to a vendor weighed on these cash flows in the first quarter.

The company has a strong balance sheet, with $1.2 billion in cash at the end of the first quarter. With its strong balance sheet and expected improvement in cash flows, the company will be looking toward mergers and acquisitions to keep building up its business. The company also trades at a deep discount from last year, with a price-to-sales ratio (P/S) of 8.8, down significantly from last year’s peak of 45.

Marqeta is a fast-growing company still in its early stages of growth. While the company has yet to turn a profit, it provides unique solutions for several major companies and is positioned well for long-term success — making it a stellar stock you can buy today and hold for the long haul.

Health
We use cookies on our website to give you the most relevant experience by remembering your preferences and repeat visits. By clicking “Accept All”, you consent to the use of ALL the cookies. However, you may visit "Cookie Settings" to provide a controlled consent.
Cookie SettingsAccept All
Manage consent