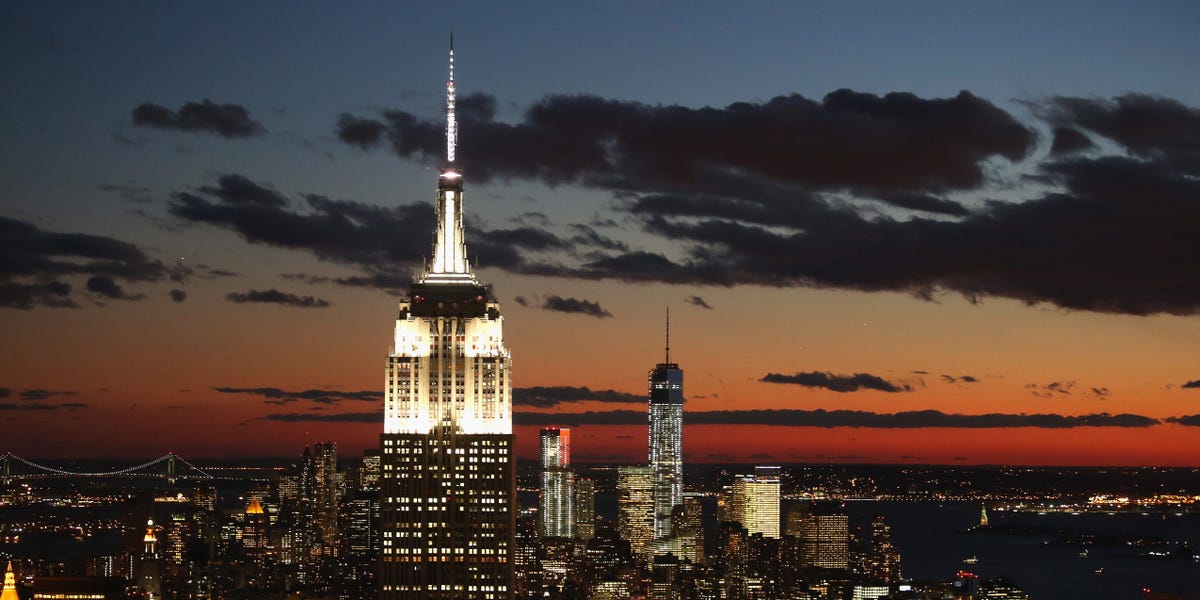 The Empire State Building has decorated the New York City skyline for more than nine decades. One of the world’s best-known buildings, it has inspired memorable movie scenes and drawn millions of tourists to its sky-high observation decks.

The 102-story skyscraper also happens to be operated in a trust led by the family of Cynthia Malkin, the wife of Democratic Sen. Richard Blumenthal of Connecticut. Malkin’s father was a real-estate mogul who today remains chairman emeritus of Empire State Realty Trust, a now publicly traded company.

For Cynthia Malkin, that real-estate investment trust earns as much as $1 million a year, according to Blumenthal’s personal financial disclosures, in which lawmakers are required to report spousal income. It’s just one facet of her inherited real-estate wealth that makes Blumenthal, who is up for reelection in 2022, one of the richest people in Congress.

The holding was among the hundreds of real-estate investments from Congress that Insider uncovered as part of its Conflicted Congress project, which reviewed nearly 9,000 financial-disclosure reports for all sitting lawmakers and their top-ranking staffers.

The Insider analysis identified real estate as a favorite way for members of Congress to pad their $174,000-a-year salaries. In all, 44 senators and 194 US House members had such properties in 2020, annual personal financial disclosures show.

Blumenthal’s financial disclosure lists at least 43 real-estate investments held by his spouse, including limited-liability companies that are earning interest on rental properties in France, Spain, and England.

Empire State Realty Trust includes not just the Empire State Building but numerous other office and retail properties in the Big Apple and New York metropolitan area. Blumenthal’s disclosure says 18 retail and office spaces are part of the portfolio.

Donald Trump, whose real-estate holdings and political ambitions collided throughout his presidency, tried and failed to acquire the Empire State Building in the 1990s. Today, Malkin’s brother, Anthony Malkin, is president, chairman, and CEO of the real-estate investment trust.

“Senator Blumenthal’s wife, and not Senator Blumenthal himself, is a passive investor in various investment vehicles that hold properties over which she has no control, influence, or discretionary power,” Maria McElwain, the communications director for Blumenthal, said when Insider asked about the properties.

The Empire State Building’s tenants have included Walgreens and LinkedIn, though The New York Times reported that some of the building’s other tenants suffered economic disruptions during the coronavirus pandemic. The Empire State Building also has received federal funding from the Federal Historic Preservation Tax Incentives Program that helps restore historic buildings, according to documents from the US Department of the Interior that didn’t specify the date of the tax credit.

In general, members of Congress and their senior staff members are not allowed to earn more than $29,595 in income outside their federal salary. But rental properties are exempted from these limits, as are certain other earnings including from stock trades and book deals.

Every member of Congress is required to report any of these outside earnings annually, including any property owned by a spouse.

Some government-watchdog groups warn that renting out property without certain guardrails — such as disclosing who is renting housing or commercial property — could pose conflicts of interest.

Lawmakers lay claim to homes, office parks, and even wineries

Insider’s analysis of every congressional disclosure revealed a panoply of properties beyond lawmakers’ personal residences.

No matter the property type, lawmakers made money. What’s less clear is how much — congressional disclosure rules don’t require members to note whether they’re disclosing gross or net real-estate income, and for most of the listings lawmakers didn’t voluntarily specify.

Some highlights from the money-making ventures among 238 members of Congress include:

Republican Sen. John Kennedy of Louisiana, for his part, is piecing together a small real-estate empire stretching across the Deep South.

He’s reported that he and his wife, Becky, own nearly three dozen properties, including parcels in his birthplace (Centreville, Mississippi), his adopted home state (Louisiana), and the Florida panhandle (Santa Rosa Beach). His holdings include three residential homes, six commercial buildings, and 23 unimproved lots.

Republican Sen. Rand Paul may represent Kentucky, but he’s happy to spread his money around the Lone Star State. The two-term lawmaker reported owning six properties in Lake Jackson, Texas, his hometown. The holdings include five residential homes as well as farmland. He also has a rental property in the retirement haven of Destin, Florida.

Sen. Chris Coons, a Democrat from Delaware, reported a property in Sanibel Island, Florida, that earns as much as $50,000 in rental income. His office did not reply to questions about the rental.

Democratic Rep. Ami Bera of California reported that he and his wife, Janine, owned nine rental properties — all within 3 1/2 miles of one another — in the Golden State’s capital. “They believe in the growth and potential of the Sacramento County area, which they have called home for over two decades,” a Bera spokesman, Travis Horne, told Insider.

Republican Sen. Ron Johnson of Wisconsin has a commercial property in Oshkosh, Wisconsin, that earns $100,000 to $1 million a year, according to his financial disclosures. (Generally, lawmakers are required by law to report their assets in income only in broad ranges.)

Johnson’s senior communications advisor, Vanessa Ambrosini, told Insider the senator had “no operational role” in the property. “He just rents it,” she said.

The tenant of the property is Pacur LLC, a plastics company where Johnson’s brother, Barry Johnson, was CEO before retiring in November. Pacur is facing a federal civil-rights lawsuit after one of its employees alleged sexual harassment.

“The senator does not have any knowledge of the alleged incident. He believes all allegations of misconduct should be taken seriously and fully investigated,” Ambrosini said. “He continues to have no knowledge of the lawsuit, and is only aware of it because of your inquiry.”

Ron Johnson sold an ownership stake he had in Pacur in March 2020 for $5 million to $25 million, according to his 2020 annual financial disclosure.

Those disclosures show Johnson and his wife still listed earning $1 million a year from Pacur. It also listed a limited-liability company for Pacur that earns more $5 million.

Ambrosini said Johnson ceased all operational involvement in Pacur in May 2010 and as of March 2020 no longer had any ownership in the company.

Congressional staff are also cashing in on rental properties

More than 200 senior congressional staff members reported rental income in 2020, according to an Insider analysis of recent congressional financial documents.

Capitol Hill staff must report this income every year. The documents they file are tucked away in Senate and House information offices and, for the most part, can be accessed only through in-person visits to Capitol Hill.

Clarke Scanlon, the state director for Republican Sen. Joni Ernst of Iowa, lists earning $1.2 million to $12 million a year from six of his rental properties located in Iowa and California. It’s not clear whether the documents report gross or net income, however, and Scanlon did not respond to requests for comment. Both staff and members are required to report their earnings only in broad ranges.

James Lazarus, the state director for Sen. Dianne Feinstein, a Democrat of California, reported earning $600,000 to roughly $6 million combined from seven of his rental properties. Among the properties are a Hawaii vacation home, a Panera restaurant in Missouri, a Walgreens drug store in Oklahoma, and a shopping center in Arizona.

“All of Senator Feinstein’s staff comply with laws related to the reporting of their assets,” Tom Mentzer, Feinstein’s communications director, told Insider. He did not elaborate on the particulars of Lazarus’ properties.

Leonard Young, the chief of staff for Rep. Julia Brownley, a Democrat of California, owns four properties all in Los Angeles. While he listed $200,000 to $2.1 million in income on his financial disclosures, he told Insider he’d reported gross income rather than net income.

“The market value is in the middle of each range,” he said. “They all have disclosed loans in the 60% loan-to-value ballpark.”

Kimberly Ross, a former chief of staff for Rep. Joyce Beatty, a Democrat of Ohio, has 10 properties in Baltimore that pull in between roughly $75,000 to $240,000, her 2020 financial disclosures show. She did not respond to Insider’s questions about the properties.

Renting property a conflict of interest?

Some watchdogs want to see more requirements for congressional staffers and lawmakers to disclose the exact dollar amounts they make from their rental incomes each year.

Tyler Gellasch, a former congressional staffer who helped write the Stop Trading on Congressional Knowledge Act of 2012, said lawmakers should provide more transparency on how their rental properties are managed and who’s renting them.

Gellasch, who is now a fellow at the Global Financial Markets Center at the Duke University School of Law, said that any lawmakers operating their own rental-property businesses could ultimately find themselves in a similar situation as Trump, whose holdings as he was sworn into office included the Trump International Hotel a few blocks from the White House.

“There was a lot of speculation to what extent were people such as foreign dignitaries, for example, coming to visit the Trump hotel to curry favor?” he said. “That was always sort of a concern or an accusation that was leveled. But that sort of concern happens with many members of Congress that is very significant.”

Sen. Jeff Merkley, a Democrat of Oregon, and his wife are together earning up to $200,000 from their four rental properties. These properties, located in Washington, DC, and Portland, Oregon, are being operated by management companies, his office said.

“Senator Merkley discloses information on each rental in his annual financial disclosure and utilizes professional management companies to ensure that they are properly managed,” Merkley’s communications director, Ray Zaccaro, said.

Asked whether the senator had ever rented his properties out to lobbyists, his office responded “none have been rented to lobbyists, and there are no known conflicts of interest.”

Gellasch, for his part, recommends that lawmakers scale back their rental-property efforts.

“We need them to act as public servants,” he said, adding that might mean “sacrificing perhaps some of their own income and opportunities to do so.”

Home Improvement
We use cookies on our website to give you the most relevant experience by remembering your preferences and repeat visits. By clicking “Accept All”, you consent to the use of ALL the cookies. However, you may visit "Cookie Settings" to provide a controlled consent.
Cookie SettingsAccept All
Manage consent